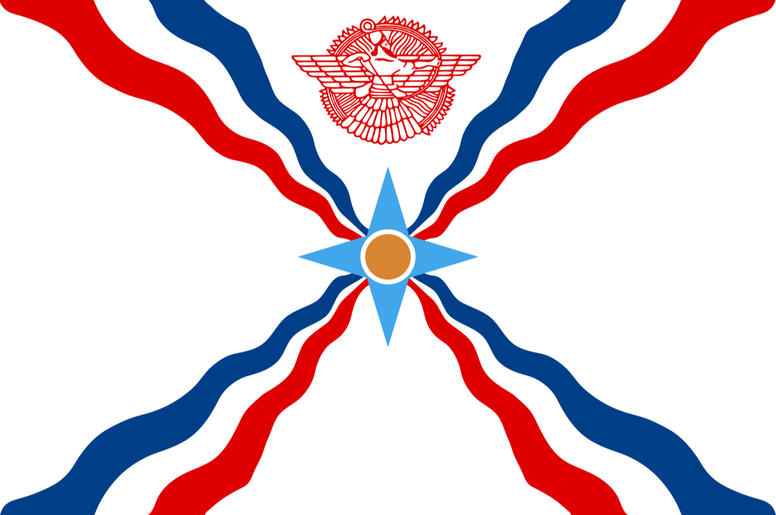 Assyrians are an indigenous group native to Northern Iraq, Western Iran, Southeastern Turkey, and Northeastern Syria. Assyrians were some of the first people to convert to Christianity as it spread. Assyrians claim the ancient kingdom of Assyria as their ancestor, as seen on the Assyrian flag, which has the star of Shamash as well as the god Ashur. Most Assyrians in Iraq live in the Nineveh Plain region.

Assyrians speak various dialects of Neo-Aramaic, also called Syriac or just Assyrian, though many Assyrians, especially those in the diaspora, do not know or are not fluent in Assyrian. According to the Endangered Language Alliance, "virtually all Neo-Aramaic languages can be considered threatened or endangered, particularly in the new circumstances of migration, and some are already thought to be extinct."

The Assyrian Policy Institute says,
"Iraq is considered the heart of the Assyrian homeland. Prior to the U.S.-led invasion of Iraq in 2003, the number of Assyrians in Iraq was estimated to be 1.5 million. Today, fewer than 300,000 remain, primarily concentrated in the Nineveh Plain and the Kurdistan Region of Iraq, though a dwindling number remain in Baghdad."

Assyrians have long been a target for violence, having faced things like the Assyrian Genocide, the Simele Massacre, and threats from ISIL/ISIS to convert, pay or die. There has also been much destruction of Assyrian culture.

Though there is less of a threat from ISIS, Assyrians are still very vulnerable and generally unprotected in Iraq. The lack of wider awareness of Assyrian issues, as well as widespread denial of Assyrian identity and indigeneity, has meant that there is very little outside support for Assyrians. Assyrian identity is often erased, and instead are reduced to being "Iraqi Christians," or "Kurdish Christians," which removes Assyrian ethnic identity and makes then into an amorphous group. Arabization and Kurdification has also sought to erase Assyrian ethnic identity. Often when discussing violence in Iraq, Assyrians are forgotten as victims- for example, the hashtag "#TurkeyIsBombingKurdistan," without any mention of the Assyrians and Ezidis who are also being bombed. Assyrian villages frequently end up in the cross firebetween opposing forces, specifically Kurdish and Turkish forces.

Donate to the Assyrian Aid Society of America, the AAS of Australia, and the AAS of Iraq. The Assyrian Aid Society's mission is "providing humanitarian aid to Assyrian Christians in the Assyrian homeland, Bet Nahrain."Donate to the GoFundMe for the AAS-AU, providing emergency relief food packets to Assyrians in need due to COVID-19.Another Assyrian Aid Society GoFundMe, this one from the AAS-USDonate to the Shlama Foundation, which aims to "engage the diaspora to fund humanitarian aid and other community projects that will help the Assyrian Chaldean Syriac people live and prosper in their ancestral homeland."Donate to the Etuti Institute, which aims to "bring children and youth together to build generations of new leaders within the communities in our Homeland."Donate to Restore Nineveh Now, which aims to support and defend Assyrians in Nineveh.Spread news about Hurmuz and Şimuni Diril, two Turkish Assyrians who were abducted after returning to their ancestral land. Şimuni's body has been found but so far there is no sign of Hurmuz. Demand justice for Şimuni and Hurmuz.Support the creation of an Assyrian Flag emoji which would raise awareness and recognition of Assyrians.Support Assyrian buisness, creators and artists, like Shamiram Media, a company devoted to "promoting and preserving Assyrian heritage in diaspora and in Assyria," or the movie "Animal Crackers" on Netflix, created by an Assyrian animator.Support Assyrian independence and the movement to create a state in the Assyrian homeland.Educate yourself on Assyrian people, history, and violence against Assyrians.Stand against anti-Assyrian ideas, like that Assyrians don't really exist, that Assyrians are lying/deluded about their history and culture, that Assyrians are not indigenous to their homeland, or that the violence and genocide against Assyrians didn't happen or that Assyrians are over-dramatizing it.Be aware that not all Assyrians are practicing Christians, though Christianity plays a major role in modern Assyrian culture and the communityFollow and listen to Assyrian activists, and spread awareness of Assyrians and Assyrian causes just as much as you do with other causes.
Who Are Assyrians